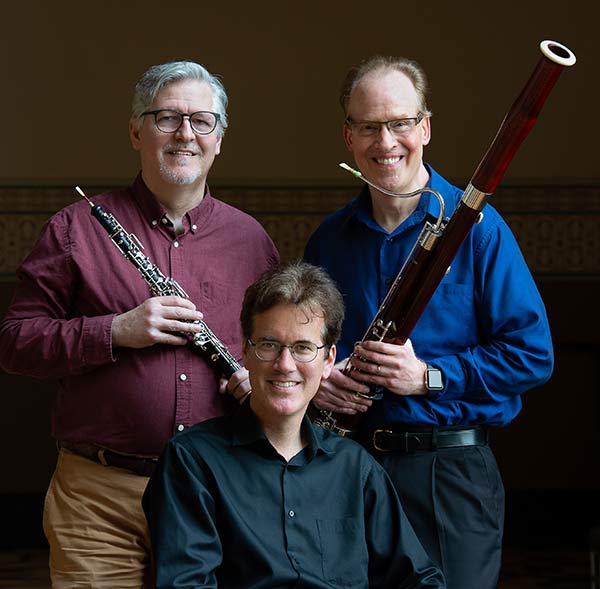 Chris Philpotts, oboist/English hornist; Hugh Michie, bassoonist; and Michael Chertock, pianist, comprise the Tidewater Trio. In addition to being men of extraordinary musical talent and experience, they all play in the Cincinnati Symphony Orchestra and have family connections in Tidewater, VA., specifically, Reedville, Norfolk and Virginia Beach. Their first performance together was a trio written specifically for them by Michael Chertock, who presented solo RCA concerts in 2009 and 2015. The trio enjoys presenting programs featuring classical chamber music, as well as jazz standards, virtuoso arrangements and even popular and patriotic music.

The Drifters, who are grouped in the rhythm and blues, doo wop, soul, and pop genres, have been entertaining the world since 1953. They served to link the fifties rhythm and blues with the sixties soul music. During their recording career at Atlantic Records, which lasted from late 1953 to early 1966, their hits included “There Goes My Baby,” “Save the Last Dance for Me,” and “This Magic Moment.” The Drifters set musical trends and gave the public 13 chart hits, most of which are legendary recordings today. Although the composition of The Drifters has changed through the years, they continue to maintain a consistently high standard as they update the venerable harmony group’s sound for the post-funk generation.

When John Bullard was in middle school, he heard “Dueling Banjos” for the first time. It sparked in him an immediate, profound and lifelong devotion to the banjo. For decades, Bullard has determinedly sought to expand the banjo’s repertoire-to be among a mere handful of players worldwide to redefine the banjo’s possibilities. Though he is an accomplished bluegrass musician, the focus of his work is classical music: Bach, Handel, Schumann, Telemann; sonatas, concertos, inventions. Bullard’s recently released CD, Classical Banjo: The Perfect Southern Art, includes Handel’s “Trio Sonata in G Minor” and Bach’s “Jesu, Joy of Man’s Desiring.”

This concert is supported by the Virginia Commission for the Arts.

Floyd Cramer’s unique “slip note” piano style was an essential part of countless country, pop, and rock hits in the 1950s and ‘60s and is widely regarded as the standard for country piano. Chet Atkins’ innovative thumb-and-two-finger guitar style led him to become known as one of the world’s preeminent guitar virtuosos, and many of the records he produced for RCA have become classics.

Though Floyd and Chet have passed away, their Nashville Legacy lives on through Floyd’s grandson, pianist Jason Coleman, and Chet’s niece, guitarist Meagan Taylor. Jason and Meagan bring new life to the “Nashville Sound” pioneered by their legendary forerunners. They play songs like Floyd’s “Last Date” on piano and Chet’s “Freight Train” on guitar, as well as sing the music of Patsy Cline, the Everly Brothers and Elvis Presley, all of whose careers were impacted by Floyd and Chet.